It's been a very slow and difficult three years since I ran a sub-3 marathon in 2012. Sometimes, it's hard for me to believe that I ever did that. So, here's what's happened since then.

I had a stress fracture in my right tibia in December of 2012 while training for a 50 miler. I wasn't as disciplined as I should have been in keeping my fitness in the water during the 9 weeks off from running and my fitness declined greatly. I came back very slowly and had an okay spring of 2013, all things considered.

During the late summer and early fall of 2013, I had a calf strain that was the worst I've ever had. I lost 9 weeks to that, which is the same amount of time that I lost to the stress fracture. I still wasn't at the fitness level before the stress fracture and my fitness declined even more. Again, I lacked discipline in maintaining fitness during a forced break from running.

After recovering from the calf strain, I slogged through the winter building my base and had a very mediocre finish at Mountain Mist 2014. A month later, Mount Cheaha completely humiliated me. I regrouped for the Chattanooga Stage Race, but again I wasn't as fit as I should have been and posted some slow times there. I just hadn't been doing the work. That's one of the things I love about running. You can't hide. If you don't do the work, everyone will know. Races are the ultimate accountability tool.

I decided that I'd build a big base through the winter and then hit the spring of 2015 with some shorter faster stuff and have a break out spring. Well, I built a big base. I completed the HTC Grand Slam. I threw in a 50 miler in between Recover from the Holidays and Mountain Mist just for good measure. I had a big base. Then, I got sick. I really didn't know what was wrong, but I just knew that I didn't feel well, ever. I struggled to run at all, let alone run fast or far. After a few nights of coughing, I was diagnosed with pneumonia. A shot and some pills later, and I felt better. The Levaquin did a number on my tendons (runners, NEVER take this drug), and I was out for over two weeks. Ugh. So much for leveraging the big base from the winter.

Barely two weeks later, I was diagnosed with pneumonia again. Two more weeks off, and this time I was referred to a specialist. A reasonably healthy guy shouldn't be getting pneumonia like that. The specialist ran all kinds of tests. I was poked and prodded in all kinds of ways. He found that I have histoplasmosis. (Google it if you want, but you may not want to ever be near me again. It's gross.) Well, soon after that, I was covered in a rash all over my body. My forehead, torso, arms, legs, even the palms of my hands and the soles of my feet. I was in complete misery for two weeks. And I couldn't take a steroid to help with the itching because of the histoplasmosis. Misery. But I've continued to take the histo medicine and now I feel great. I feel better than I have in a long, long time.

Well, I'm just going to be honest with myself. I know my fitness level right now. It isn't what I want it to be, but no good will come from pretending it's better than it is. I know that I can't handle the mileage I once did. I know that I can't hit the same splits on the track that I once did. I'm in 19:57 5k shape and I can handle about 55-60 miles per week. That's where I am. I can start right here, right now and I can improve. 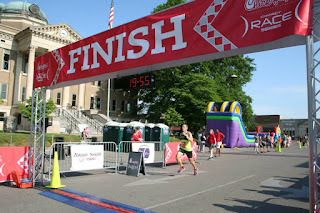 And that's what I'll do.

I find palpable motivation from pithy sayings for some reason. Well, here's another that's my mantra for the rest of this year.

You can make excuses or you can make progress, but you can't make both.
Posted by Eric at 6:20 PM

I'm glad you're finally on the road to recovery. Keep plugging away my friend. Master runners only get stronger, so the PR's will soon return!

Background for this blog

Eric
I'm a Christian first. That drives everything that I do and defines who I am. I decided to take better care of this body that God has given me. Training for a marathon was part of that effort. I blogged the training for my first 26.2 along with other random daily thoughts. Then, the blog just kept going. Then I added a blog about some spiritual insights and questions.